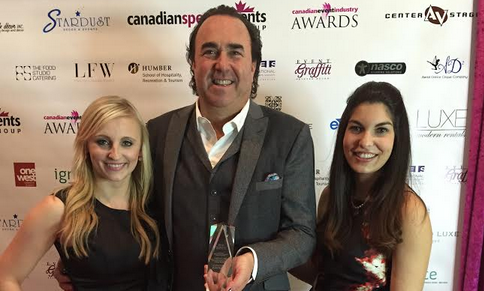 FT. LAUDERDALE, FL  April 7, 2016   – The Canadian Event Industry’s pinnacle mark of professional achievement and the highest honor a Canadian event can earn has been awarded to Solutions with Impact for the “Best Event for a High Profile Charity” on behalf of the 2015 KitchenAid Cook for the Cure Culinary Showdown in support of the Canadian Breast Cancer Foundation for its creativity, logistics, use of budget, design, overall entertainment value, strategy planning, and successfully profiling the organization with an overall wow factor.

In the last three years the event has raised more than $1.9 million in critical funds for the Foundation, which is the leading community-driven organization in Canada dedicated to creating a future without breast cancer.

“It’s great to be recognized by our peers, which shows what can be done with the right mix of creativity and commitment,” said Joel Hock President Solutions with Impact.  The Canadian Event Industry Awards, hosted by canadianspecialevents.com, is a national awards program which recognizes outstanding achievements in Canadian special events, meeting management, conference planning and exhibition management.  SWI has been awarded the winner of the Canadian Event Industry’s Most Outstanding Logistical Achievement Rally for Kids with Cancer Los Angeles 2012: Best Event Produced for a Charitable Organization: Chef’s Challenge 2011; Event Professional of the Year: Joel Hock 2010; Most Outstanding Event Under 100,000; YPI 2008; and Best Event Produced for a Charitable Organization: Bell Celebrity Gala 2008, 2007, 2006, 2005.

“This coveted award is well deserved with many more to follow,” said business partner BG Capital Group Chairman Bobby Genovese who joins Hock in his fundraising efforts as Rally for Kids with Cancer Co-Chairman, which has generated more than $15 million for The Hospital for Sick Children.
“Joel’s extraordinary efforts illustrate the power of working together to provide much needed resources and support for such important initiatives. I could not be more honored to work with such an incredible individual and organization.”
Media Contact:
Lorraine Quartaro, Senior Director, Communications
Solutions with Impact
416-703-5371 ext. 236 or 416-433-7232